Leave a comment Posted by Alex Colao on November 6, 2010

It’s easy to get caught up in a pattern of swirling thoughts—thinking about a laundry list of things that need to be done, ruminating on past events, or could-be situations of the future—and learning mindfulness can help. But what exactly is mindfulness? It can be defined as a mental state that involves being fully focused on “the now” so you can acknowledge and accept your thoughts, feelings, and sensations without judgment.

END_OF_DOCUMENT_TOKEN_TO_BE_REPLACED

Comments Off on Saint Teresa d’Avila Posted by Alex Colao on November 6, 2010

“Give it time and God will capture you and make you his own exclusively in accordance to your generosity. Don’t expect signs and wonders. Aim only to be kind, compassionate, patient, and gentle as Jesus showed. Enjoy God’s presence, silence and his good pleasure.” 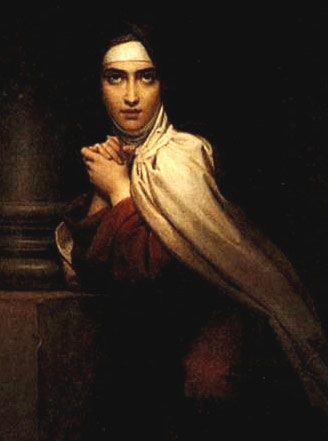 Saint Teresa is the Doctor of Prayer. Her writings on this subject are unsurpassed. One of her favorite prayers for many years was the Our Father Prayer and through it she was raised to the heights of contemplation despite numerous distractions, traveling, and diversified duties in her reform efforts with the Order of Mount Carmel called the Discalced Carmelites. However, despite major disappointments, setbacks, and discouragements, nothing prevented her from staying focused in doing God’s holy will in all manners. She was mainly responsible for the renewal, reform, and the expansion of the Carmelites throughout Spain for many years despite poor health and a host of spiritual challenges. Her patience in organizing, continual prayer, and goodwill helped her acheive major expansions and the rebuilding of the Order at a time when laxity and a easy lifestyle permeated into the contemplative life for religious living.  Complacency and lack of disciple prevailed and Teresa felt a call by the Lord for more dedicated and consecrated efforts to live out one’s religious vows with prayer and sacrifice and for the building up of the holiness of the church and individual sanctity.  Not without reason did the church proclaimed Sts Teresa and St Catherine of Siena the first women Doctors of the Church in 1970. Teresa was a wise and practical woman who was extraordinarily kind and charitable, and greatly gifted in the explanations of the highest degrees of prayer and union with God, and love of neighbor.  Teresa assures us that those who practice prayer faithfully will receive all they ask beyond their greatest expectations and hope. God used her to rebuild and expand many convents and monasteries as she radiated smiles, humor, and goodwill amidst heavy crosses and conflicts.

“Anyone who has not begun to pray, regularly and daily I beg, for the love of the Lord, not to miss so great a blessing. There is no place here in the convent for fear, but only desire……I know from experience-namely that no one who has begun this practice of daily prayer however many sins he may commit, should never forsake it.”

Bibliography – The Way of Perfection – Interior Castle, The Mansions  – Autobiography Saint Teresa of Avila – Letters of Saint Jerome – The Imitation of Christ – Interpreting St Teresa of Avila – Patrick Burke  ‘Oh, what a good friend You make, my Lord’

The Ecstasy of S. Teresa di Avila, a large statue [height 3.5m] designed to be illuminated by reflected light from a hidden window. The statue depicts a remarkable mystic experience related by S. Teresa herself: 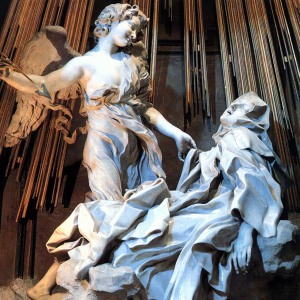 Beside me on the left appeared an angel in bodily form . . . He was not tall but short, and very beautiful; and his face was so aflame that he appeared to be one of the highest ranks of angels, who seem to be all on fire . . . In his hands I saw a great golden spear, and at the iron tip there appeared to be a point of fire. This he plunged into my heart several times so that it penetrated my entrails. When he pulled it out I felt that he took them with it, and left me utterly consumed by the great love of God. The pain was so severe that it made me utter several moans. The sweetness caused by this intense pain is so extreme that one can not possibly wish it to cease, nor is one’s soul content with anything but God. This is not a physical but a spiritual pain, though the body has some share in it — even a considerable share.

Comments Off on Thomas Merton Posted by Alex Colao on November 6, 2010

MY LORD GOD, I have no idea where I am going. I do not see the road ahead of me. I cannot know for certain where it will end. Nor do I really know myself, and the fact that I think I am following your will does not mean that I am actually doing so. But I believe that the desire to please you does in fact please you. And I hope I have that desire in all that I am doing. I hope that I will never do anything apart from that desire. And I know that if I do this you will lead me by the right road, though I may know nothing about it. Therefore I will trust you always though I may seem to be lost and in the shadow of death. I will not fear, for you are ever with me, and you will never leave me to face my perils alone.

The Merton Institute for Contemplative Living

Our vocation is not simply to be, but to work together with God in the creation of our own life, our own identify, our own destiny. We are free beings and sons of God. This means to say that we should not passively exist, but actively participate in His creative freedom, in our own lives, and in the lives of others, by choosing the truth. To put it better, we are even called to share with God the work of creating the truth of our identity.  Thomas Merton 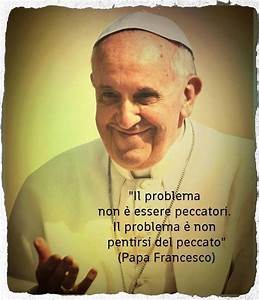